Becoming Granola
I am a cloth diapering, breastfeeding, cosleeping, baby led weaning, extended rear facing, eco conscious, married mommy to two beautiful children. They have changed my view on the world we live in. It is now my number 1 goal to make it the best I can for them to grow up in. I find myself always rethinking how I want to live my life and often feel like sharing my findings and thoughts with others. So I guess here's my chance :o) I will talk about topics that interest me. If you dont like them or dont agree, well... there's nothing much I can do!

Hard to believe my last post was over 4 months ago. This pregnancy has just been zooming by. With Abigail in school, and me still working and running, we will become a family of 5 before we know it!
Abigail in school
School has done wonders for our daily routines. We essentially had no choice but to jump on the wagon very quickly with homework and getting her lunch ready every day. She LOVES school so we never have to ask her to do her homework which is nice. I'm sure she is saving that battle for another year.
It took us about a month to figure out how to prepare her lunches so that she'd eat it all. Everything in small "easy to eat" servings.  We've also been successful in creating waste free lunches for her. Everything is in reusable baggies or containers. The most garbage we've created is with cheese string wrappers (we've tried wrapping it ourselves but she's fussy like her mama;) ) 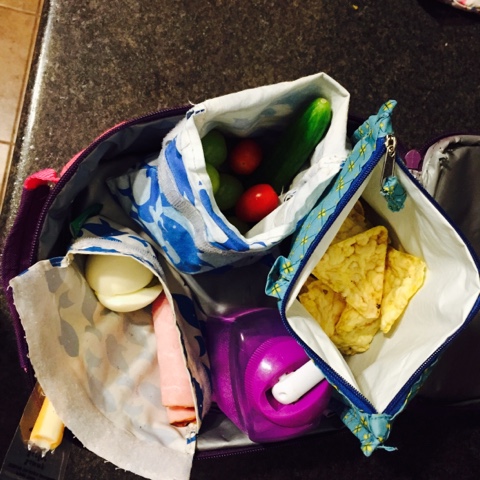 Running
Hard to believe that I was able to run right up to my 30th week of pregnancy. Winter has finally arrived here and since I'm not risking slipping on any ice, I've decided to stop for a couple months.  It's incredible when I realize that I've ran over 400km, 1 half marathon, 2 10ks and a 5k this pregnancy. I'll definitely be counting down the days until I can run again after I have Baby3. 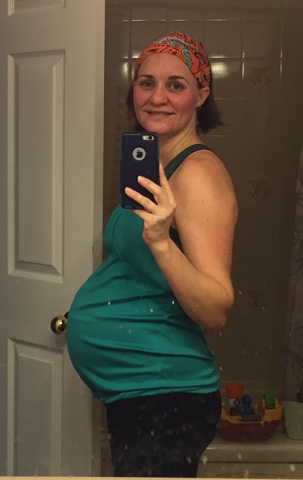 Working
Still working part time. Still trying to work enough hours to qualify for maternity employment insurance. With another 30 days still to work, I doubt I'll achieve it especially since they can't call me the morning of to cover a teacher (too stressful to get both kids AND myself ready in such short notice) but at least the paychecks I'll receive leading up to this birth will be put to good use.
Getting ready for Baby3
Over the last 5 years, I've learnt a lot about how you really don't need much for a baby. Boobs, diapers and a car seat are pretty much it. We still have newborn onesies and sleepers from Abigail and Zachary. I've purged our cloth diapers so I only have left what I'll use and need. And we just bought ourselves a new van today!!! Although the 3 kids could fit in our smaller hatchback, all our stuff or groceries could not so a bigger vehicle was definitely needed.
So still left to do:
- Get a crib (take off a side and attach it to our bed for safe cosleeping)
- Strip and prepare diaper
- Wash newborn clothes
- Prepare food/meals
- Pack hospital bag
So really not all that much. But with maybe 2 months left, starting now will hopefully prevent the mad rush at the end.
Well thanks for reading! Hopefully it won't be another 4 months until I write again!
Posted by Becoming Granola at 4:47 PM No comments:

It's been incredibly difficult to get out and practice my 10ks in preparation for pacing Maritime Race Weekend. Keegan has been away for most of it and our province has decided to enter a wicked heat wave. Super high humidity makes it already very warm before the sun even rises. I did manage to get in a 5k one morning with my favorite little guy. Hitting a pot hole at the end may have ruined our jogging stroller. I'll definitely have to look into that a bit more. 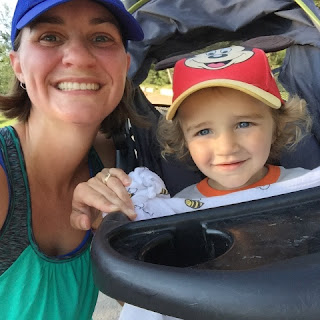 I got accepted into the midwife program here in the city! I had added my name to the list too late when I was pregnant with Zachary. Still went on to rock my vbac though. This time around, I am trying to avoid an induction so taming that sneaky high blood pressure will be a big goal. Since we got pregnant on my 2nd post pregnancy cycle, my ovulation date is 100% known. I'm confident of my dates give or take a day so I'm eager to see if an early dating ultra sound will agree with it.

Amazing to realize that this pregnancy is already a quarter of the way done. It's going to go by so quickly!

Although baby is the size a small pea and a blueberry, it sure knows how to suck the energy out of me.

Week 6 (18km) - Managed to get in 2 runs. Decided to join some guys from my marathon clinic and run a couple hills. They were running 9 hills I believe (they are both currently training for an upcoming full marathon) so I knew right from the start that I was not going to run as many as them. I ran 4. They were hard. And the weather was hot and humid. But the guys were nice and waited for me at the top of each one since I was obviously running them much slower than I was used to.

Then there was Not Since Moses. Back in the spring, I won registration for the race through a #runatcan twitter party hosted by @RunAtCan . Were it not for that, we never would have gone. It was a FANTASTIC run! We hung out with @RunAtCan and Shannon (@okanaganflower) before the race started. Probably my most challenging to date (even harder than my full marathon!) but it was a definite favorite. The small rocks, sand, mud, water, boulders... it was all great! I almost twisted both ankles but managed to stay up on both feet the whole time!

Week 7 (20km) - Again, 2 runs. First was on a beautiful evening. After supper, decided to just go out and run down the hill along the water. Nice and simple.

Then my first long run in over a month. The temperature was supposed to be lower so I got things ready for an early morning 15k. I am pacing the 70 minute 10k group at Maritime Race Weekend so I really had to practice keeping a steady 7min/km pace. Worked out perfectly!

Managed to log in 84km in the month of July. Really need to step up my nutrition game. I'm still finding myself pretty tired. I'm sure that food is having an effect on that. Now that summer is slowly coming to an end it will be much easier for me to organize and stick to a meal plan.

Did you find it tough to get into a routine in early pregnancy?